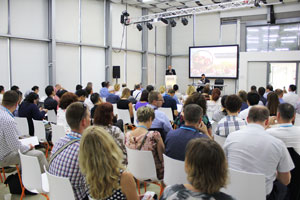 SEED AND BIOLOGICAL YIELDS OF NARBON VETCH GENOTYPES UNDER CENTRAL ANATOLIA CONDITION, TURKEY
Onur Ileri, Suleyman Avci, Ali Koc
Pages: 430-435
Published: 20 Jun 2016
Views: 2,048
Downloads: 447
Abstract: Narbon vetch is an annual forage legume that can be successfully cultivated and used as both grain and hay in animal feeding in arid and semi-arid climates. Even though narbon vetch is not commonly grown in Turkey, the plant has a significant potential for the future because it is suitable for winter sowing and capable of enough production (forage or seed) capacity under shorten spring growing period. The study was conducted in Eskisehir plain (Central Anatolia Region of Turkey) between 2014 and 2015 years. In the study, 6 lines and 2 cultivars of narbon vetch that obtained from different sources were compared in terms of plant height, biological yield and grain yield. According to results, plant height did not show significant difference among cultivars but it was different between years. Plant height was 50.0 and 73.8 cm in 2014 and 2015, respectively. Average plant height was 61.8 cm, however, it varied between 44.7 and 77.5 cm among cultivars. Although there was no significant difference between cultivars with regard to biological yield, differences were significant between years (P<0.05). Overall biological yields were 5064 kg/ha-1 and it was 3896 and 6232 kg ha-1 in 2014 and 2015, respectively. Biological yield ranged from 2865 to 7967 kg ha-1 among cultivars. Grain yield was significantly different (P<0.01) between years, it was 1112 kg ha-1 in 2014 and 1754 kg ha-1 in 2015. The highest grain yield was 2274 kg ha-1 and it was obtained from line 2461. Year x cultivar interaction was significant (P<0.05). There was no difference recorded in Bozdag cultivar among years while genotypes 2391, 2461 and 2466 were produced more grain under better climatic conditions. Line 2466 showed satisfying grain production in the contrast experimental years. In conclusion, Bozdag cultivar is recommended to cultivation in the region and similar ecologic conditions however line 2466 have a prominent potential to developing new cultivar.
Keywords: semi-arid climate, narbon vetch, plant height, seed yield, biological yield
Cite this article: Onur Ileri, Suleyman Avci, Ali Koc. SEED AND BIOLOGICAL YIELDS OF NARBON VETCH GENOTYPES UNDER CENTRAL ANATOLIA CONDITION, TURKEY. Journal of International Scientific Publications: Ecology & Safety 10, 430-435 (2016). https://www.scientific-publications.net/en/article/1001126/
© 2022 The Author(s). This is an open access article distributed under the terms of the Creative Commons Attribution License http://creativecommons.org/licenses/by/3.0/, which permits unrestricted use, distribution, and reproduction in any medium, provided the original work is properly cited. This permission does not cover any third party copyrighted material which may appear in the work requested.
Download full text

Back to the contents of the volume
© 2022 Science Events Ltd